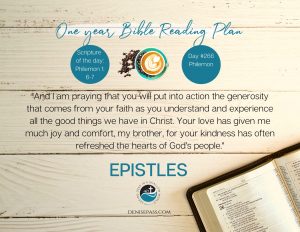 Living in the Grace Paradigm

Sometimes we mess up and make mistakes that seem to be beyond repair. That’s a perfect situation for God’s grace. God freely gives us grace when we confess and repent, but do we do the same for others? Living in the grace paradigm means we extend the grace we have also received.

Bible Reading of the Day: Philemon

Onesimus was in a fix. He had wronged Philemon and he was a slave on the run. But God’s grace has a way of meeting us and restoring us, if we are willing.

In Paul’s letter to Philemon, there is an earnest plea for Philemon to accept Onesimus as a brother in Christ, who had formerly been a slave.

Living in the Grace Paradigm—Being Counter-Culture

“Onesimus was the fugitive slave of Philemon, the apostle Paul’s friend. Onesimus had robbed his master Philemon and fled to Rome, a large city where he could easily hide. Providentially, Onesimus encountered Paul in Rome where the apostle was serving time in prison.”

“Paul uses a play on words when he refers to Onesimus in verse 11: “Formerly he was useless to you, but now he has become useful both to you and to me.” The name Onesimus means “helpful,” “useful,” or “profitable.” It was a common name for slaves in that day. Before salvation, Onesimus had been useless or unprofitable to Philemon, but now he had become immensely beneficial to both his master and to Paul. As a believer in Jesus Christ, Onesimus lived up to his name.”

“On behalf of Onesimus, Paul, still imprisoned in Rome, wrote his letter to Onesimus’s master, Philemon. The apostle pleaded with Philemon to accept Onesimus back, not as a slave but as a believer and a brother in Christ.”

Living in the Grace Paradigm—No Longer a Slave

“Philemon and his family lived in Colossae, and the Colossian church met at his house. Paul wrote his letter to the Colossians at the same time he wrote to Philemon. In that letter, Paul mentioned that Onesimus would be coming home. Paul gave both letters to Tychicus and Onesimus to carry back to Philemon (Colossians 4:9).”

“Paul’s heart was that Onesimus would no longer be a slave—to sin or to man. We see this in verse 15-16, “15 For perhaps this is why he was separated from you for a brief time, so that you might get him back permanently, 16 no longer as a slave, but more than a slave—as a dearly loved brother. He is especially so to me, but how much more to you, both in the flesh and in the Lord.”

Paul’s appeal is a strong one and a personal one. Continuing on in verse 17-19,

“17 So if you consider me a partner, welcome him as you would me. 18 And if he has wronged you in any way, or owes you anything, charge that to my account. 19 I, Paul, write this with my own hand: I will repay it—not to mention to you that you owe me even your very self.”

Paul was willing to pay Onesimus’ sin debt. Just as Christ paid ours.

Living in the Grace Paradigm—Doing the Right Thing

In Christ we are under a new paradigm—we don’t operate as the world does. Slavery may have been a part of the society in that day, but it was not a part of God’s Kingdom.  We have slavery in the world still today and need to fight it.

Living in the Grace Paradigm—Facing Our Problems

The work of restoration cannot begin until a problem is fully faced. Paul was counter-cultural in his request. And he was operating under grace, not law. We will likely have to be counter-cultural, too. But we have to recognize the problems. Running from them will not give us the healing we so desperately need.

“6 And I am praying that you will put into action the generosity that comes from your faith as you understand and experience all the good things we have in Christ. 7 Your love has given me much joy and comfort, my brother, for your kindness has often refreshed the hearts of God’s people.”

Friends, are we putting into action what we know and say we believe? It might mean going against the culture like Paul did. And it definitely means extending grace to others even when we don’t think that they deserve it.

Who is the Onesimus in your life? Someone who might have taken from you or left you or hurt you. Forgiveness sets you both free. Or maybe we can be like Paul was—intervening between two people who need to be restored.

Join me live at 8am ET: www.facebook.com/deniseduboispass

Missed one of the Bible time lives? No problem! Check it out on my YouTube channel: www.youtube.com/denisepass_seeingdeep